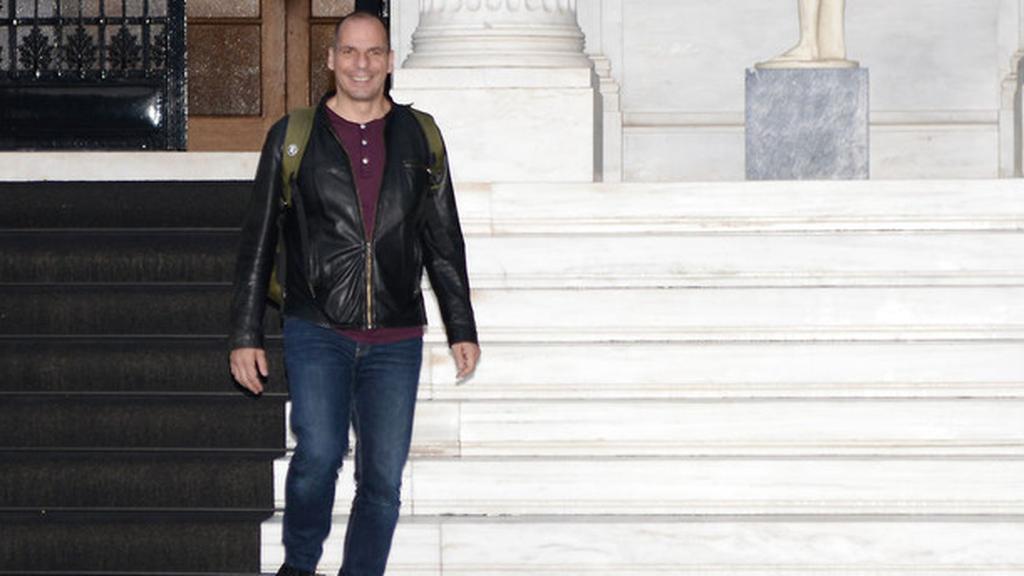 Game theorists know that a Plan A is never enough. One must also develop and put forward a credible Plan B – the implied threat that drives forward negotiations on Plan A. Greece’s finance minister, Yanis Varoufakis, knows this very well. As the Greek government’s anointed “heavy,” he is working Plan B (a potential exit from the eurozone), while Prime Minister Alexis Tsipras makes himself available for Plan A (an extension on Greece’s loan agreement, and a renegotiation of the terms of its bailout). In a sense, they are playing the classic game of “good cop/bad cop” – and, so far, to great effect.

Plan B comprises two key elements. First, there is simple provocation, aimed at riling up Greek citizens and thus escalating tensions between the country and its creditors. Greece’s citizens must believe that they are escaping grave injustice if they are to continue to trust their government during the difficult period that would follow an exit from the eurozone.

Second, the Greek government is driving up the costs of Plan B for the other side, by allowing capital flight by its citizens. If it so chose, the government could contain this trend with a more conciliatory approach, or stop it outright with the introduction of capital controls. But doing so would weaken its negotiating position, and that is not an option.

Capital flight does not mean that capital is moving abroad in net terms, but rather that private capital is being turned into public capital. Basically, Greek citizens take out loans from local banks, funded largely by the Greek central bank, which acquires funds through the European Central Bank’s emergency liquidity assistance (ELA) scheme. They then transfer the money to other countries to purchase foreign assets (or redeem their debts), draining liquidity from their country’s banks.

Other eurozone central banks are thus forced to create new money to fulfill the payment orders for the Greek citizens, effectively giving the Greek central bank an overdraft credit, as measured by the so-called TARGET liabilities. In January and February, Greece’s TARGET debts increased by almost €1 billion ($1.1 billion) per day, owing to capital flight by Greek citizens and foreign investors. At the end of April, those debts amounted to €99 billion.

A Greek exit would not damage the accounts that its citizens have set up in other eurozone countries – let alone cause Greeks to lose the assets they have purchased with those accounts. But it would leave those countries’ central banks stuck with Greek citizens’ euro-denominated TARGET claims vis-à-vis Greece’s central bank, which would have assets denominated only in a restored drachma. Given the new currency’s inevitable devaluation, together with the fact that the Greek government does not have to backstop its central bank’s debt, a default depriving the other central banks of their claims would be all but certain.

A similar situation arises when Greek citizens withdraw cash from their accounts and hoard it in suitcases or take it abroad. If Greece abandoned the euro, a substantial share of these funds – which totaled €43 billion at the end of April – would flow into the rest of the eurozone, both to purchase goods and assets and to pay off debts, resulting in a net loss for the monetary union’s remaining members.

All of this strengthens the Greek government’s negotiating position considerably. Small wonder, then, that Varoufakis and Tsipras are playing for time, refusing to submit a list of meaningful reform proposals.

The ECB bears considerable responsibility for this situation. By failing to produce the two-thirds majority in the ECB Council needed to limit the Greek central bank’s self-serving strategy, it has allowed the creation of more than €80 billion in emergency liquidity, which exceeds the Greek central bank’s €41 billion in recoverable assets. With Greece’s banks guaranteed the needed funds, the government has been spared from having to introduce capital controls.

Rumor has it that the ECB is poised to adjust its approach – and soon. It knows that its argument that the ELA loans are collateralized is wearing thin, given that, in many cases, the collateral has a rating below BBB-, thus falling short of investment grade.

If the ECB finally acknowledges that this will not do, and removes Greece’s liquidity safety net, the Greek government would be forced to start negotiating seriously, because waiting would no longer do it any good. But, with the stock of money sent abroad and held in cash having already ballooned to 79% of GDP, its position would remain very strong.

In other words, thanks largely to the ECB, the Greek government would be able to secure a far more favorable outcome – including increased financial assistance and reduced reform requirements – than it could have gained at any point in the past. A large share of the acquired resources measured by the TARGET balances and the cash that has been printed would turn into an endowment gift for an independent future.

Many people in Europe seem to believe that Varoufakis, an experienced game theorist but a political neophyte, does not know how to play the cards that Greece has been dealt. They should think again – before Greece walks away with the pot.

Hans-Werner Sinn, Professor of Economics and Public Finance at the University of Munich, is President of the Ifo Institute for Economic Research and serves on the German economy ministry’s Advisory Council. He is the author, most recently, of The Euro Trap: On Bursting Bubbles, Budgets, and Beliefs.